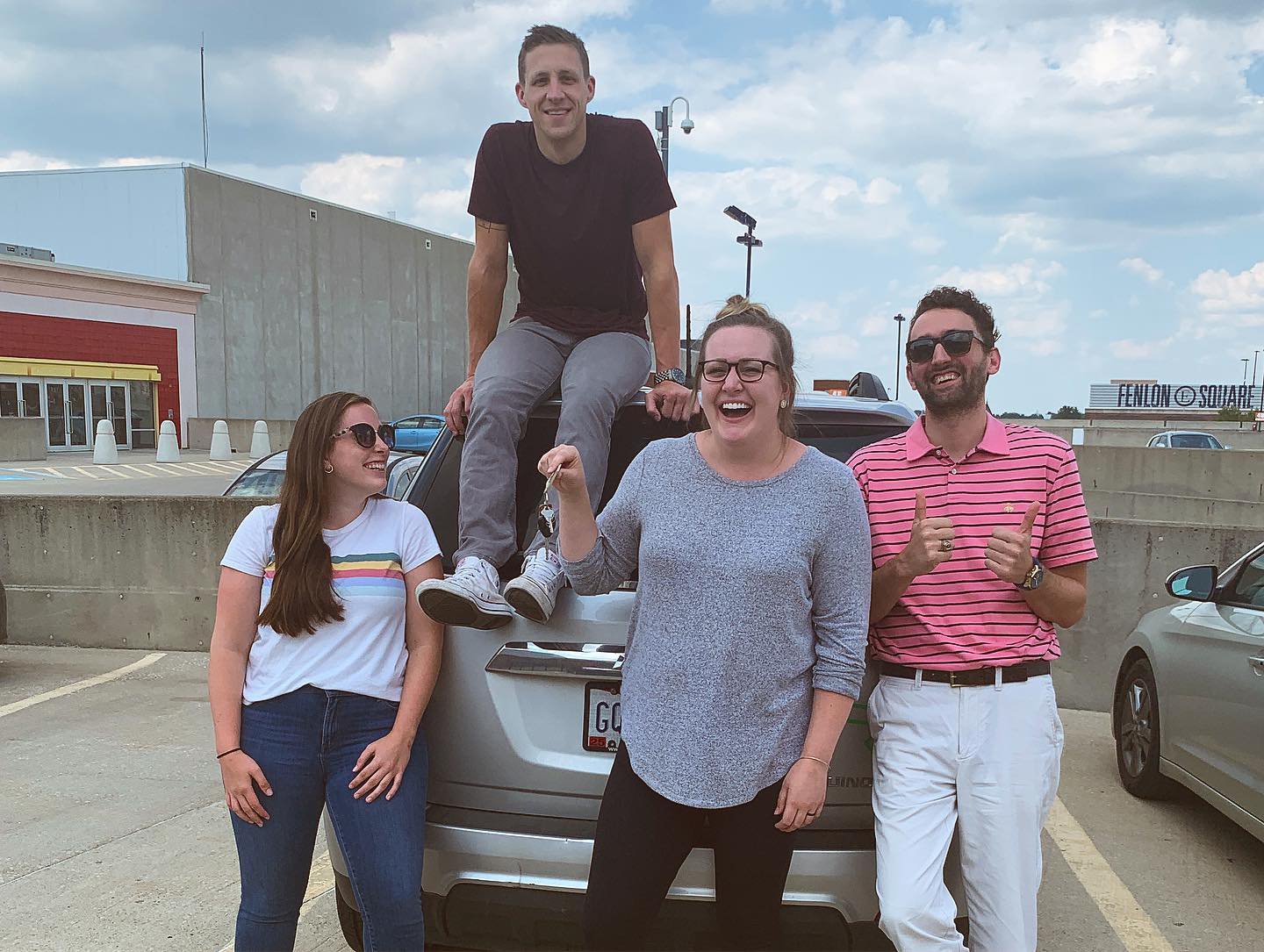 Smart Columbus works with over 70 leading employers in the Columbus region to provide educational programs and mobility benefits to ensure residents of our region have affordable, safe and sustainable commute options.

Employer partners are working to reduce single occupant vehicle (SOV) commutes by 10 percent by the end of 2020 – a bold goal requiring creative, collaborative solutions. Although small- to mid-size companies may have less funding for mobility programs than their enterprise counterparts, they are uniquely positioned to launch cost-effective, personalized programs highly aligned with workplace culture that have a big impact.

Fahlgren Mortine, a national marketing and communications agency that employs 111 people in its Columbus headquarters office, reduced SOV drivers by 48 percent in one week through an internal carpooling match program. Led by the human resources department, Carpool Week matched employees for carpools based on proximity and interests. Participants were informed about the campaign for weeks leading up to the launch and were also provided incentives throughout the week to further encourage carpool behavior.

Christopher Washington, human resources program manager for Fahlgren Mortine and the company’s mobility ambassador for Smart Columbus’ Acceleration Partner program, says that leaning in on the culture and collaborative environment of the organization made the program a success.

“We work hard to maintain a person-forward approach to all of the work that we do,” says Washington, who personally matched the company’s carpool participants. “When we started thinking about developing this program and how we would pair people in a meaningful way, we leaned on our culture to form carpool groups that would resonate with associates.”

Nearly 70 percent of Fahlgren Mortine employees participated in a survey about their mobility habits three months before Carpool Week. Around 80 percent of respondents indicated they drive alone to and from work. Of this percentage, more than 55 percent shared they would consider an alternative form of transportation if the time spent commuting could be used more productively.

The Fahlgren Mortine Columbus office is located at Easton Town Center, a popular retail and business district in central Ohio with limited transit and bike access along high-speed wide roads surrounding the shopping area. Due to a free, attached parking garage, the organization knew easy, convenient parking would be a hurdle to overcome in encouraging associates to leave their cars at home. Not only is parking free, but many employees commute throughout the workday meeting with clients across the region. For these reasons, Fahlgren Mortine took a human-centered, practical approach to designing their program.

“We needed to present this program in a way that showed employees they could go about their day and still have all the conveniences and flexibility,” Washington says.

Instead of using a digital application to match employees and manage the program, Washington manually matched all 26 Carpool Week participants.

“We saw nearly 25 percent of our Columbus staff say, ‘Yes, we would love to participate in this program,’” Washington says. “Any concerns about participation, which were largely about uncomfortable commutes with employees, were alleviated with individual conversations.” Fahlgren Mortine wanted to communicate the idea of carpooling to employees as a way to use commuting time in a more productive and meaningful way, all while saving transportation dollars, reducing stress and vehicle wear. In order to get employees to buy in and participate in Carpool Week, the company began communicating with employees three weeks prior, using digital communications and flyers around the office to make people aware.

“We really wanted to present the information in a way that was intentional leading up to the Carpool Week announcement,” Washington says. “It seems basic, but posters do a lot when it comes to communication. It was great having those up around the office. Clients, guests and vendors were also able to see the campaign.”

Carpool Week was scheduled from July 22-26. Here are the communications activities leading up to the event:

July 1: Promotional teaser posters were hung throughout the office encouraging associates to consider the benefits of carpooling.

July 11: Carpool Week was announced at Fahlgren Mortine’s all-company meeting. The announcement reinforced the mobility survey findings, shared the program structure and emphasized the benefits of participation. The company also noted support from Smart Columbus through the Ignite Action Fund.

Also, email communication was sent recapping the Carpool Week details shared at the all-company meeting and included information on how to sign up.

July 15: Department leaders reminded internal teams to sign up for Carpool Week during weekly department status meetings. This approach was used to demonstrate buy-in and support from leadership.

July 19: Carpool Week participants received a ‘Next Steps’ email with information they needed to make their trips a success.

During the week, social media was used to highlight employees who were carpooling. At the end of the week, an email was sent to measure program impact and how to continue carpooling. Overall, Carpool Week prevented nearly 1,400 SOV miles, which is about the distance between Columbus and Denver with about 100 miles left to spare.

Washington says because the program was well subscribed, Fahlgren Mortine is looking into ways to continue incentivizing carpooling.

To encourage continued carpooling among staff, every Friday through August 30, Fahlgren Mortine awarded $100 in gift cards to selected carpool participants.

“I think for the future, we would have a different conversation around how we engage our regional colleagues who communicated participation was a little bit harder for them because of their smaller office sizes,” Washington says. “Then I think about what's next, and how do we really infuse this into our culture as a long-term commitment.”

Employees want it to be easy. Fahlgren Mortine needed to overcome the common perception of carpooling being difficult. To tackle this, participation was made as easy and enjoyable as possible. Participants simply had to sign up and Fahlgren Mortine took care of coordinating the rest. This learning was most apparent in regional offices. For future programs, the company says it needs to identify alternative ways to engage employees in other locations.

Be mindful of interpersonal dynamics. A portion of associates had concerns about uncomfortable car rides with team members they didn’t know. If there is a hands-on approach to carpool coordination for an organization, group team members with at least one person they already know.

Make sure timing is right. Although Fahlgren Mortine exceeded its participation goals, Washington says even more employees may have participated if Carpool Week hadn’t been held during the height of summer vacation season. In the future, Washington says another carpool event would take place in the Fall or Spring.

Ensure your incentives support the goal. A big program goal was creating less impact on the environment. One of the incentives offered included an exclusive breakfast and lunch for all Carpool Week participants. For future Carpool Weeks, Washington says the company would consider using recyclable/reusable plates and flatware to reinforce the program commitment to the environment.

Ultimately, Washington said the company’s culture and size made it easy to create a big impact with the carpool program.

“If you're a smaller organization, you may have more visibility within your staff. You have to make it personal and feel empowered to talk with your employees about your overall goal. That’s how you connect the mission of your program with the culture of your organization.”

Get more detail on communication strategies used in the report below.