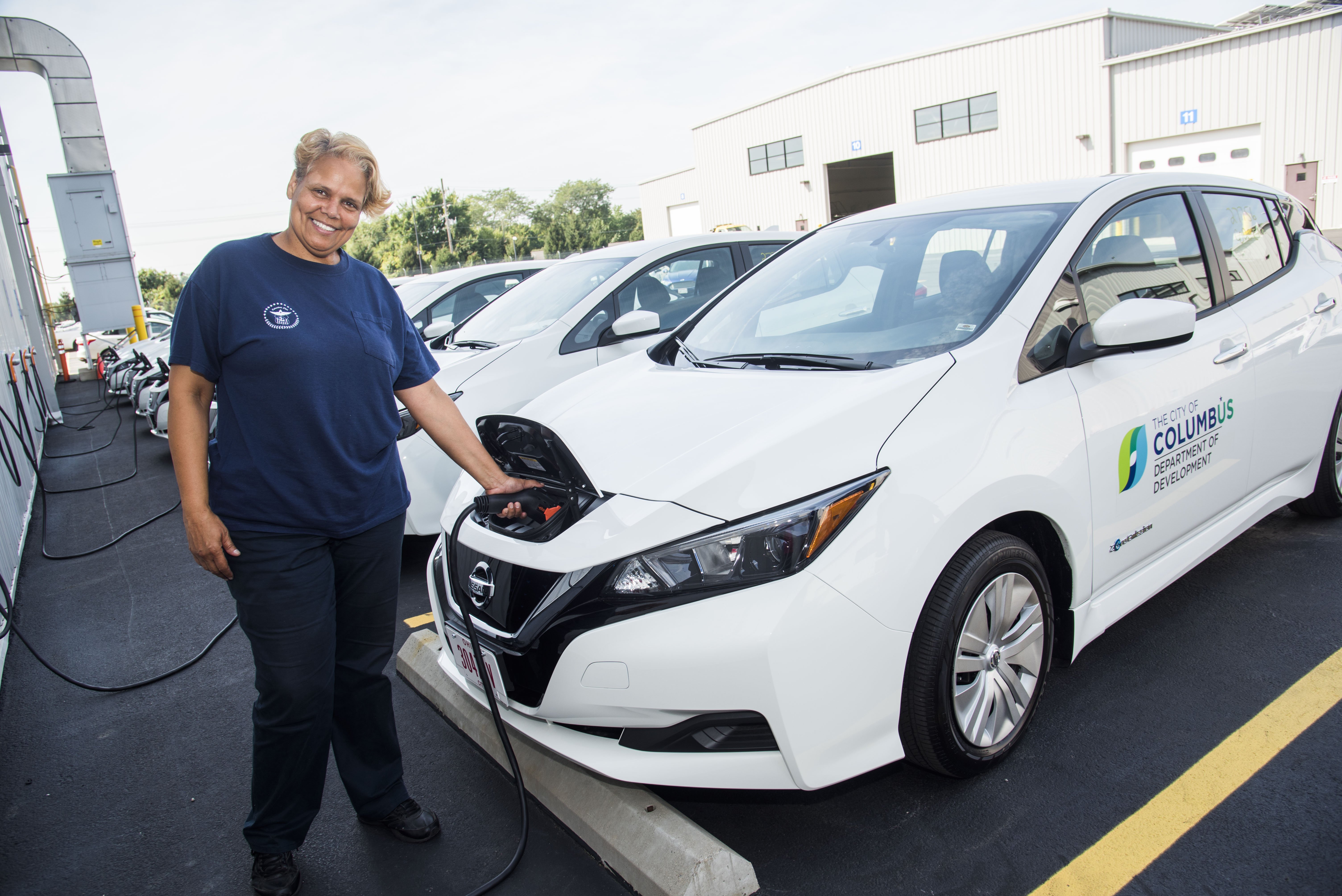 When it comes to electric vehicle (EV) adoption, the City of Columbus has been one of the most impactful leaders in the Midwest. Within the three-year Smart Columbus grant period, the city purchased and deployed 200 EVs across its department fleets.

Procurement and deployment of EVs was done in three phases over the grant period. Phase one included the initial order of 93 EVs. Phase two was approximately nine months later with an additional 32 EVs ordered and eight EV chargers installed for the fleet division’s use in maintenance of EVs. The final phase wrapped up in year three with the final 75 EVs ordered and put into service as charging infrastructure allowed.

Though increasing EVs in public fleets was a goal for the Smart Columbus grant, the purchase of those EVs had to make good business sense, says Kelly Reagan, fleet administrator for the City of Columbus.

“While the City of Columbus made the decision to drive the Smart City program by acquiring EVs in Columbus, it was very important to earn the buy-in of the end users,” Reagan says. “Having goals and creating vision for change requires everyone involved to share the vision. In other words, folks within the fire, police and public health departments had to believe that EVs would work for all these different applications to complete their daily missions.”

The city did have some advantages in procuring 200 EVs over three years—a centralized fleet made decision-making more streamlined, and the city created a procurement contract to capture a portion of the federal tax incentive through the lessor and/or dealers.

“It gave us the ability to kind of drive change from the top down,” Reagan says. “I don't know how we could have even completed this task of implementing EVs without a completely centralized fleet.”

Below are some of the best practices from the City of Columbus’ EV fleet adoption efforts:

The City of Columbus is one of a small percentage of public fleets that uses GPS for data collection. Reagan says the City of Columbus has used GPS in its fleets for seven years, enabling the division to use vehicle data to drive decisions. The city also partnered with the Electrification Coalition through Smart Columbus to use supplemental data through their GPS to understand the city-wide fleet.

As the city considered the first 100 EVs to procure, Reagan says capturing GPS data and telematics were the first steps in creating a plan to select the right vehicles to replace.

“It's mission-critical to have telematics, because it allows you to peel the onion back and look at the duty cycle on any given asset, how much key-on/key-off time, where the cars are parked in the evenings and mornings and average miles on a daily basis,” Reagan says.

The fleet division worked with the Electrification Coalition to complete a sustainability analysis to score the vehicles based on their drive cycles and estimated life span, which led to the first 100 EVs selected for purchase.

“After looking at all of the critical pieces of information, we scored vehicles between 80 and a 100,” Reagan says. “We provided a score that would determine if it was an optimal unit to convert to an EV.”

One thing that Reagan discovered during the sustainability analysis is that choosing the best candidates for EVs was sometimes contrary to achieving the best return on investment.

“The government vehicles that fit the best as EVs from a sustainability standpoint are units that can be used for a shift and then returned to home base to be plugged in overnight. That vehicle needs to run its course of business within that seven to nine hours without having to charge. That was one of the key criteria we looked at when we considering sustainability,” Reagan says.

Ultimately, this led the city to select vehicles with lower mileage to convert to EVs.

Financial incentives can significantly lower the acquisition costs of EVs, greatly improving the vehicle’s total cost. In 2010, the federal government began offering a tax credit of up to $7,500 to encourage the adoption of EVs.

The City of Columbus understood the upfront cost challenge and used a combination of its typical procurement process and new arrangements to overcome it.

The city planned to use the same concept for EV procurement, and aimed to secure all, or a portion of, the federal tax credit benefit. As a non-taxable entity, the city could not claim the tax credit itself, but knew the credit could be passed on through a purchase or lease deal. A provision of the EV tax credit in the federal code states the vehicle seller can be treated as the taxpayer when an EV is purchased by a tax-exempt entity. Securing a triple-net dealer invoice price, plus tax credit benefits could significantly reduce the upfront cost burden of procuring EVs for the city.

The city developed a request for proposal (RFP) that allowed bidders to offer innovative financial arrangements in their proposals. Following the RFP, the city developed an innovative vehicle acquisition program, a Universal Term Contract (UTC), that allowed the city to lease vehicles for a short period followed by a title transfer to the city, attain vehicle pricing at triple-net dealer invoice, and capture a portion of the federal EV tax credit. This UTC is a 12-month, open-ended lease with one payment at the outset and one at the end of the lease and the vehicle titles are then transferred to the city at the end of the 12-month period.

The contract developed by the City of Columbus can be implemented by any public agency, even those outside of Ohio, and demonstrates a viable way to reduce the acquisition costs of EVs across jurisdictions. The contract also allows city employees to purchase EVs at the city’s negotiated price to encourage greater adoption of EVs in the region.

Along with procuring 200 EVs, the city also had to strategically install EV chargers. In total, the city installed 160 charging ports at 18 sites to serve the new EVs in its fleet. Reagan says the goal was to consolidate the number of chargers based on the departments that were receiving EVs.

Reagan says that the city is now looking at ways to align its budget to better anticipate the increased electricity costs of EV charging.

5. Getting buy-in from end users

Reagan says the fleet division ensured that there was substantial education about EV use, with a strategic goal to get buy-in from those who would use the vehicles most frequently.

“Just because the vehicle works on paper, it doesn't mean an agency will be open to accepting an EV for its operation,” Reagan says. “If a fleet division doesn't have the customer service ability to educate end vehicle users, it will be more difficult to implement the program.”

EV education and maintenance training was provided by Clean Fuels Ohio and the Columbus State Community College. The City of Columbus also held Ride & Drive events to allow employees to test several EV models and learn more about charging and other EV considerations.

“It's important to let people feel and touch and drive the vehicles before they commit to using them for their mission, so that they become comfortable with them. While decisions can be made from a top down standpoint, driving and emphasizing sustainability, it has to be implemented from a bottom up standpoint,” Reagan says.

6. Fleet EVs in the future

As the EV market continues to expand with larger vehicles and stronger batteries, Reagan says that public fleets should be readying for 10- and 13-liter engines and powertrains on mid-size to heavy-duty vehicles coming to the market within the next five to 10 years.

Making it Simple for Columbus Region Municipalities to Electrify Their Fleets

EV Fleet Transition: What to Consider