The Smart Columbus brand is intentionally bold. As the sole winner of the first-ever U.S. Department of Transportation $50 million Smart City Challenge, we knew the images, art and words associated with Smart Columbus had to be eye-catching and forward-thinking. In considering the organization’s human-centered mission, we also wanted the brand to be inclusive and tangible to all of our residents.

Our brand strategy was created in partnership with Columbus-based agency Resource Ammirati (now IBM iX), led in part by Todd Yuzwa, creative director at IBM iX. The agency was given about six months to research, strategize and produce creative for the Smart Columbus brand that also had to be blessed by city leaders and community stakeholders, including Columbus Mayor Andrew J. Ginther.

“We live in a great city that is super progressive. When we presented our branding ideas, every audience in every room, the people got it. I think that’s a reflection of the town, where people understood the role this organization would have,” Yuzwa says. “This initiative was about innovation. It needed to stand out and we didn't have a lot of time to promote it. We needed to be visible right away.”

Overall, the unique approach to the Smart Columbus brand has made global impact. Since 2017, Smart Columbus has generated more than 90 million media impressions in local, national and trade publications. We’ve welcomed more than 27,000 visitors to our Experience Center from 80 different cities and 10 different countries. We’ve directly engaged with more than 100,000 residents in two years. However, Yuzwa realized that most times the image of the brand reaches the public before our team connects with them.

“It's that first moment of truth when someone sees something at a glance, they make the decision to engage with it. Do they want to continue reading and find out about it? Do they want to show up at this event and learn some more? A lot of those decisions all happened within that first moment of the ‘at-a-glance’ test,” Yuzwa says. “If you use the typical or expected conventional approach to a government organization program, people are going to ignore it a little easier.”

Below are some of the top strategies that we used to create a successful smart cities brand: Getting the mission of Smart Columbus right was essential and important to developing the overall brand. The initial steps included research and strategy to make sure all of the priorities of the grant were included to demonstrate why the organization exists.

“We landed on this idea that the mission for Smart Columbus was to accelerate human progress through open mobility. Each one of those words were really important,” Yuzwa says.

A Choice Not to Go Green Though sustainability is part of Smart Columbus, making the brand identity lean heavily on environmentalism and “green” would’ve been both cliché and limiting, Yuzwa says.

“This work is around revolutionizing transportation. A ‘green’ movement doesn't immediately sound like revolutionary transportation,” Yuzwa says. “A green message almost feels like a luxury. If you have the money, you can give up certain things, instead of getting more.”

Don’t Be Afraid of Color Relying more on the color palettes from startups and technology companies, Yuzwa says that the bold and active colors of Smart Columbus inspire innovation. “If we didn't go with this more tech innovation aspect, we would never have arrived at this great color palette,” Yuzwa says. “That was an early decision to present something bold and more consumer-facing, less like a government-run program.” 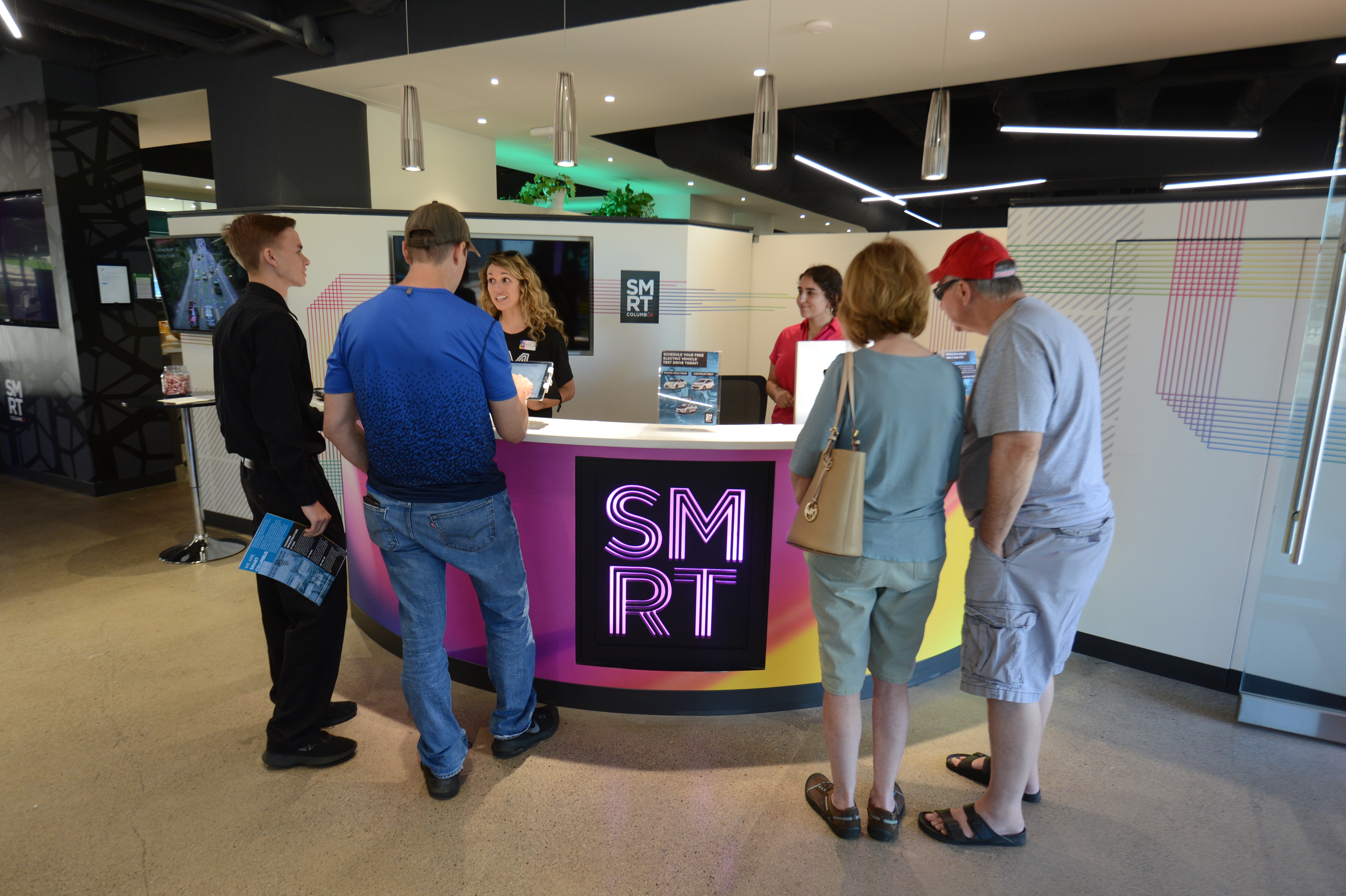 The Smart Columbus logo is infamously missing an “A,” and Yuzwa says dropping the vowel was another nod to the tech world.

“The goal was for Columbus to own the word a little bit more. It's a catchy phrase that a lot of people want to use. If you attend a conference you know that any type of technology, people want to call it smart,” Yuzwa says, adding that spelling and stacking the letters was purposeful to create a visual signature that no one else could use.

“It's a bit of tech culture cue,” Yuzwa says. “I think when people see that spelling, they'd get a sense that this is about technology and innovation.”

Standing Out on Social

In the age of social media, it’s important that all brands think about assets and displays that are Instagram-worthy, Yuzwa says. Within our Experience Center, we’ve created several stations and backgrounds that encourage people to take selfies for social media. At public events, our giveaways and activities are interactive so that people can become a part of the brand and share easily.

“When you see a big backdrop at the Ride & Drive Roadshow or Smart Columbus Live, with color and the energetic graphics, it makes people want to be involved,” Yuzwa says.

Though the Smart Columbus brand has several elements, Yuzwa says the “recipe” for creating designs is fairly simple.

“It was really important that we gave Smart Columbus a brand system that was almost unbreakable. Everybody can work with it. The materials will always look great, but it doesn't take a designer's hand all the time. That was important,” Yuzwa says.

The brand recipe Yuzwa composed is four simple elements: visuals of the people of Columbus, an activated color palette, use of mobility or technology imagery, and overlay pattern work.

“If you use a combination, you always end up with something that works. We gave the brand folders of assets with photos, all the colors, different patterns and artwork to mix and match,” Yuzwa says. 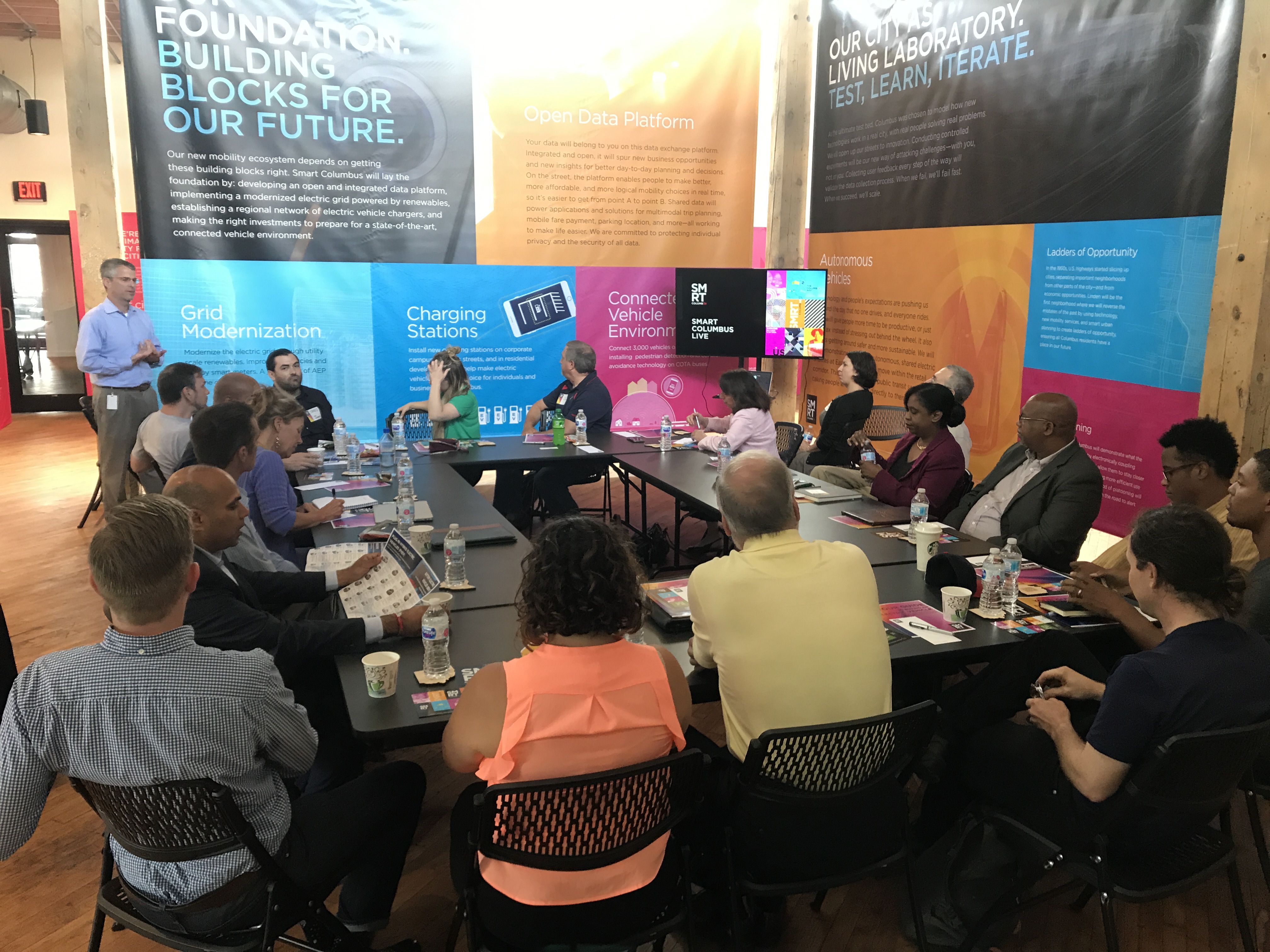 It’s okay to step outside of the typical government branding, in order to grab people’s interest, says Yuzwa. “At first, I predicted a lot more conservativeness because civil work tends to be that way.”

But the Smart Columbus leadership wanted to lean in on visuals that inspire innovation.

“You're not just holding your own events. You're showing up at other events where you've got competing tables, tents, all kinds of other activities for people's attention. You have to turn the volume up,” Yuzwa says. “If you're just quiet at your table, people are going to walk right by. It’s okay to be loud and proud.”